I feel like I have a lot of experience hiding parts of myself because I have been a sex worker and because I am transgender. During the time Tittybar Tales takes place (and when I first started drawing the comic) I simply thought of myself as ‘a girl who wished to be a guy.’ I just saw my feelings as some weird thing that made me happy but that no one else ever needed to know– unless we were going to date, and then it became very important. I have since realized that I felt that way because I am transgender. I always enjoyed costumes, make up, and performing so I didn’t think that I could ‘qualify’ as transgender because I enjoy many feminine-coded things. I also grew up in an environment where coming out as a queer trans man would have been very difficult.

People sometimes feel entitled to know these things about me, and have been shocked and hurt when I tell them. What am I supposed to tell people, “Hi nice to meet you I’m a queer stripper”? Well lately I’ve actually found that to be a pretty good way to go about it.

I do want people to know I’m a transgender guy, I don’t advertise it because frankly it’s just not that relevant to the stories in Tittybar Tales. But I am very interested to make comics about my experience as a trans person and I do have stories that encompass both aspects of myself. Last year I came out as trans to one of my old clients who has since become a good friend of mine. After telling me he was supportive he paused and asked “does this mean I’m gay?” We laughed and I told him “Well I definitely know you love boobs!” The truth is I don’t know if he would still be attracted to my looks if he were to see me looking more ‘masculine.’ If there is one thing I’ve learned it’s that people see what they want to see when it comes to gender, in other words, you can’t judge a book by its cover.

I try to tell my stories in a relatable and entertaining way. I’ve had many people tell me that my stories are ‘educational’ too. If I seem just too far out for some folks, you might be surprised that you know someone who is queer, trans, a stripper or all of the above.

There is a reason why people keep some aspects of our lives private and it’s to keep other people from judging and harming us. I have always been the type to take a path of less resistance. I don’t enjoy confrontation and I like to get along with everyone! That’s part of why I loved being a stripper. For me, doing my job meant having a good time and forming a pleasurable connection with someone! I know I can be naive sometimes, and I have been really shocked and hurt when my friends and family have treated me in degrading manner because of my job and my identity. But I have also been very lucky to have some really cool and supportive people in my life. I also tend to ‘blend’ (as in, people often read me as cis/straight) so I haven’t been subject to much harassment. For other queer and trans sex workers this is not the case, especially trans women and especially trans women of color who bear the worst harassment and discrimination.

I am currently looking for a way to get Tittybar Tales published, (because there’s nothing like the joy of holding a comic in your hands!) I am looking forward to making more comics about other stuff in the future too and hope that  y’all continue to follow me even beyond Tittybar Tales! Thanks so much for reading and I would love to hear from you!

Get A Copy Of The Book! 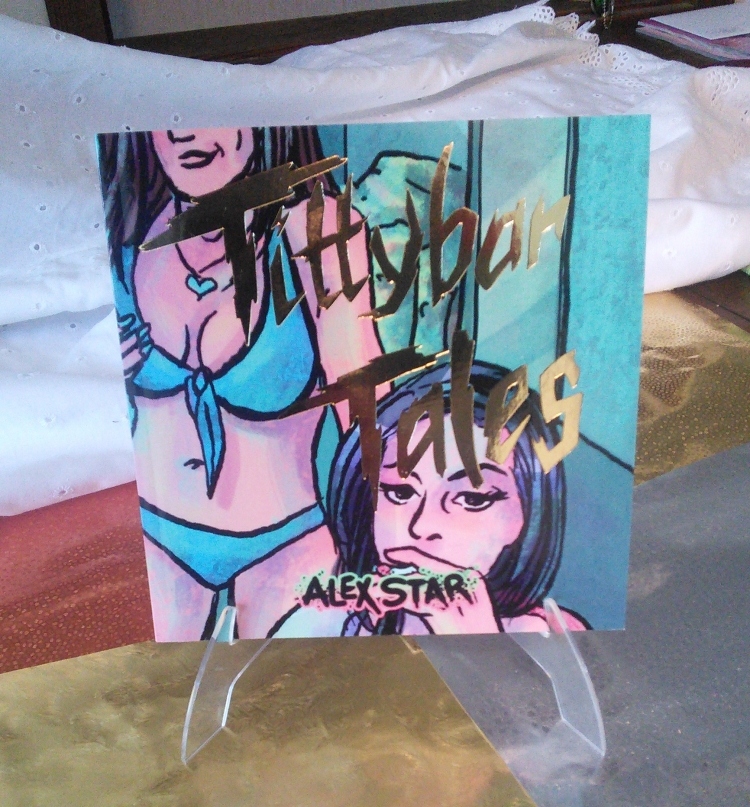